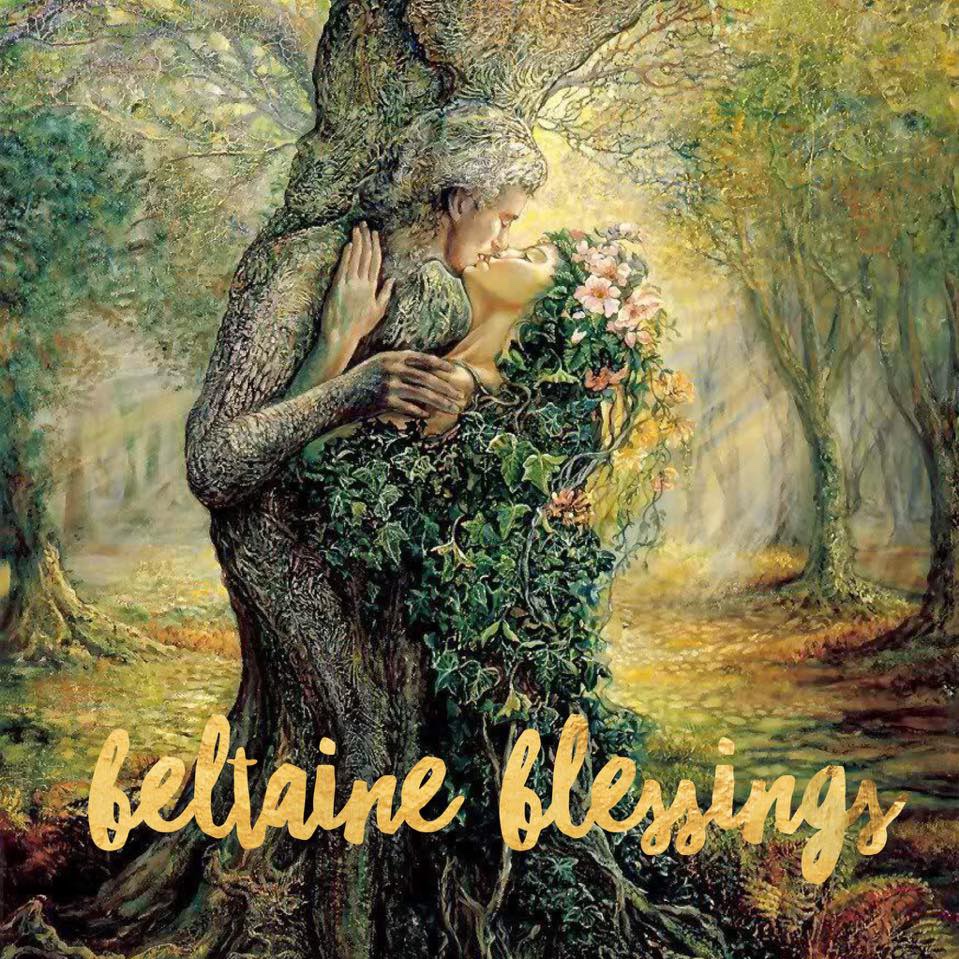 The first day of May — or a few days later, if we observe “true” Beltaine —  has been celebrated by many cultures in Europe as the first day of Summer, especially by early pagan cultures — from the Romans and their Festival of Flora on April 27th to my Celtic ancestors who celebrated Beltaine on April 30 / May 1. On this day, those in the Southern Hemisphere will be celebrating Samhain.

In the Southern Hemisphere, this is celebrated on what is Samhain in the Northern Hemisphere: November 1st (beginning at Sunset on October 31st). And, of course, many also choose to celebrate on the actual cross-quarter date between Spring Equinox and the Summer Solstice, which this year falls on November 7th at 11:18 UTC, per Archeoastronomy.

Many celebrate lunar Bealtaine on the New Moon in Scorpio, which this year — coincidentally — also falls on November 7th! More precisely, it arrives at 8:01 am PT/ 16:01 UTC. (as this changes year to year, consult your favourite lunar calendar for the New Moon in Scorpio each year, such as Lunaf or MoonCalendar.

Both Samhain and Bealtaine are my favourite celebrations in the Celtic calendar, a time to tune in to the rhythms of Nature and celebrate the seasons, the elements, and the sacred dance with Gaia.

Beltaine is the third of the Celtic spring/summer fertility festivals (Imbolc in February and Ostara in March) and is also considered one of the four major Fire festivals which includes the cross-quarter days of Imbolc, Lughnasadh and Samhain. It marks the beginning of Summer. Its sister festival, Samhain, is the third of the Celtic autumn celebrations, and marks the beginning of Winter, and a new Wheel of the Year.

Beltaine falls evenly at the mid point between the Spring Equinox and the Summer Solstice, and is traditionally celebrated as the start of Summer, the beginning of the Light half of the year, a time when the flocks were lead to pasture, and the fertility of crops and livestock were celebrated with bonfires (representing transition and purification).

These celebrations also divide our year into one long day, with Beltainne bringing in the summer (the Light) and Samhain marking the transition to winter (the Dark). At Beltaine we celebrate life, and at Samhain we honour the dead, our ancestors.

On both days, the Celts — and modern Wiccans and Pagans — believe that on these dates the veils between the worlds are at their thinnest. Some call this “the time of no time”, a time when the physical world and the spirit world mingle freely and magick happens.  In Faerie lore, it is believed that on Beltainne, Faeries come back from their winter homes, ready to make mischief in our world (hence the many protection spells of Beltaine!).

In past days, the Celts (and Druids) celebrated Beltaine (also their word for the month of May) as the Union of the Goddess and the Green Man,  the fertility of spring and summer, the fertility of the fields and by celebrating their own sensuality, sexuality and fertility. At the Spring Equinox — aka Ostara and  Alban Eilir —we celebrated the Maiden within, the beginnings of new growth and life. At Beltaine, that has matured towards womanhood, and a celebration of our sensuality and sexuality. We celebrate our Divine Feminine and Divine Masculine.

Typical symbols of Beltaine rituals included bonfires, special foods (especially those with floral elements and honey), dancing around the May Pole, oak leaves to represent the Green Man, sipping May Wine, celebrating the symbolic union of the Divine Masculine and Divine Feminine, decorating with garlands, rowan sprigs and boughs of spring flowers, especially hawthorn aka The Queen of the May.  Many communities would also have an honorary May Queen and her consort, the Green Man.

The roots of the word Beltaine are somewhat lost in time but scholars typically translate it as “Bael’s Fire” or “Brilliant Fire”. Why? Bel, aka Belenos, was a Celtic god, and the Celtic word for “shining” is beal; tene means fire.

The May Pole tradition is likely rooted in early fertility rites. Typically the pole (representing male fertility) would be placed in the village green, decorated with red and white ribbons (representing female and male fertility, respectively) and then celebrated with a ribbon dance around the pole by the village maidens. And often the May Pole would be created with Hawthorn (The Queen of the May, so symbolic of Beltaine), one of the three Faerie Trees (Oak, Ash & Thorn).

The kindling for the Beltaine fire is typically drawn from the Nine Sacred Woods. This lovely old Scottish poem in our header image names only eight (and is slightly different to those in the Rede). The Wiccan Rede names nine woods but cautions that the ninth, elder, “is the Lady’s tree burn it not or cursed you’ll be”. 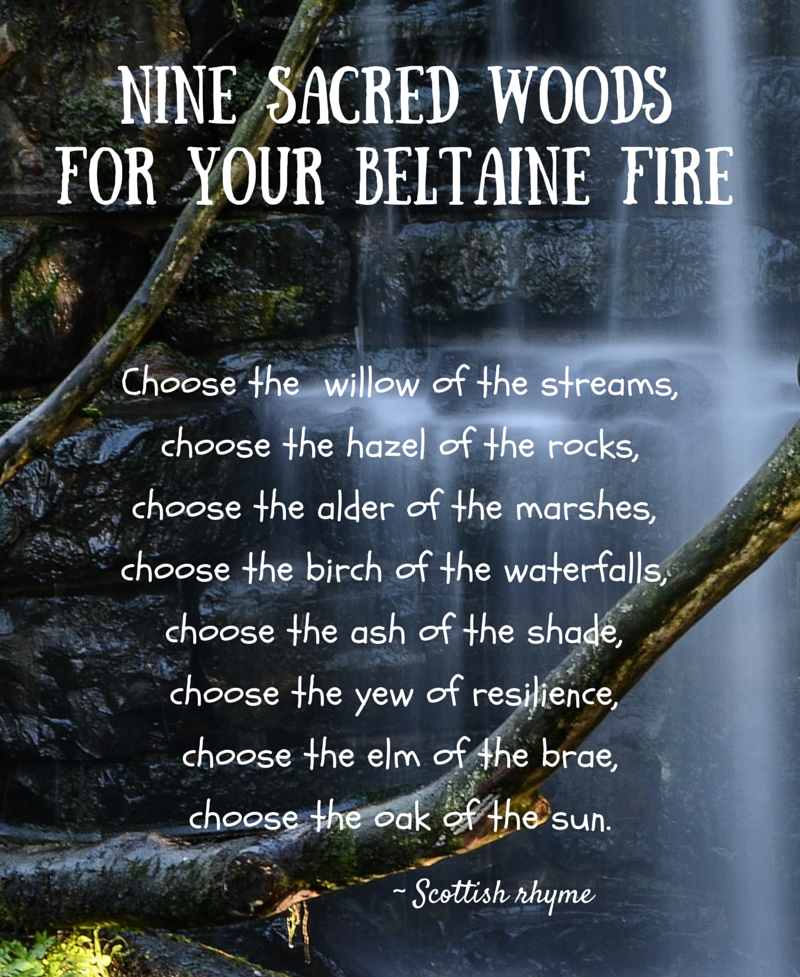 Fire is a common symbol of purification, cleansing and renewal. And as one of the four Fire festivals, the Beltaine bonfire and Neid-fire were an important part of the celebrations. The Neid-fire — aka wild fire or need fire or Teine-eiginn — was kindled by rubbing two pieces of wood against each other (or with a bow, spindle and piece of wood), which then ignited the Beltainne fire.

The community would extinguish their winter hearth fires and reignite with the new neid-fire, symbolically reconnecting the community to each other, to the Sacred Fire and to the Earth.

And then the celebrations began. Not only did my ancestors dance around the bonfire, some were known to jump across the fire.

They also purified their herds with the Beltaine bonfires. Recognized as the start of Summer, Beltaine was the traditional time for turning out the livestock to the summer meadows for grazing. The community would lead the animals between adjacent Beltaine bonfires to purify and protect them. It sounds like a very powerful smudging ritual to me . . . and likely killed off a lot of fleas and ticks!

The Beltane Fire Society of Scotland includes a Fire Arch in their celebrations, inviting the May Queen and the Green Man to pass through beyond the human world, and to leave part of themselves behind. For the humans participating, this is an invitation to “let go of our ego and the aspects of our past that our holding us back so that we can move forward with the change of the seasons.” (Source Beltane.org)

Perhaps this symbolical passage can be part of your Beltaine Soul Work?