Tributes to Hekate were found at ancient crossroads, with statues placed so weary travellers could seek her protection. Any crossroad or liminal place (for me, it’s the seashore or the river’s edge) is a perfect place to honour Hekate. And there are many ways to do so . . . with a feast, a release ritual, crafting, cooking , an altar and meditating/journeying.

Hekate is also formally celebrated on November 16th (also known as The Day of the Crossroads), on or about the arrival of the Leonid Meteor showers which —for some — signify the end of Samhain and the closing of the veils between this world and the Otherworld. This is traditionally the time for the Sidhe (aka the faerie folks, and pronounced “she”) and other creatures —including our Ancestors —  to return to the world of Spirit.

The veils may be thinnest at Samhain, but the veils are permeable and also accessible at the liminal spaces of our physical world, especially those associated with water: mists, ponds, wells, the sea, shorelines and rivers. These are places where we can always sense the closeness of the Other Worlds.

In ancient times, celebrants would meet at a crossroads on the last day of the Dark Moon (Deipnon means “evening meal” in Greek) and shared a communal supper of fruits, eggs, fish (usually herring) and honey cakes, leaving out a plate for the Goddess. Other traditional items included leeks and garlic. Before meeting, each would ritually cleanse the Self and their homes, in order to be prepared and pure for the New Moon.

For both Hekate’s Supper and Hekate’s Deipnon, followers would ritually cleanse the Self and their homes and sacred spaces, in order to be prepared and “pure” (free of clutter, debris, whatever is holding you down) for the New Moon. Time to pull out your besoms and brooms! A small portion of the debris is often placed beside one’s altar for Hekate to represent what you are shedding from the last lunar journey (or the last year if honouring on Hekate’s Night), so that the new lunar journey (year!) begins whole and free.

In my own rituals, I do this a little differently: I collect a pinch from my house sweepings, add it to my cauldron and use it in my final release ritual for the month on that darkest day of the lunar cycle.

One can also choose to cleanse and purify in other ways, such as decluttering a closet, a room, a bookshelf, etc., and gifting to a charity shop or recycling depot. As I often say, whatever resonates with you is the way to celebrate and honour the work!

The next day they would meet again on the New Moon, known as the Noumenia (the first day in the lunar month in Greek traditions, recognized by the first glimpse of the waxing crescent), to divine for good omens and Hekate’s wisdom.

Consider holding your own Hekate Supper with friends . . . and it doesn’t have to be leeks, herring, eggs and honey!

Other Resources Last year, the wonderful Gather Victoria shared a recipe for Hecate’s Triple  Chocolate Cheesecake, as an offering for Hekate’s Night, pictured below. If you’re not already following Gather Victoria on Facebook, check them out on the @gathervictoria page.

Click here —or the image below —for the recipe. 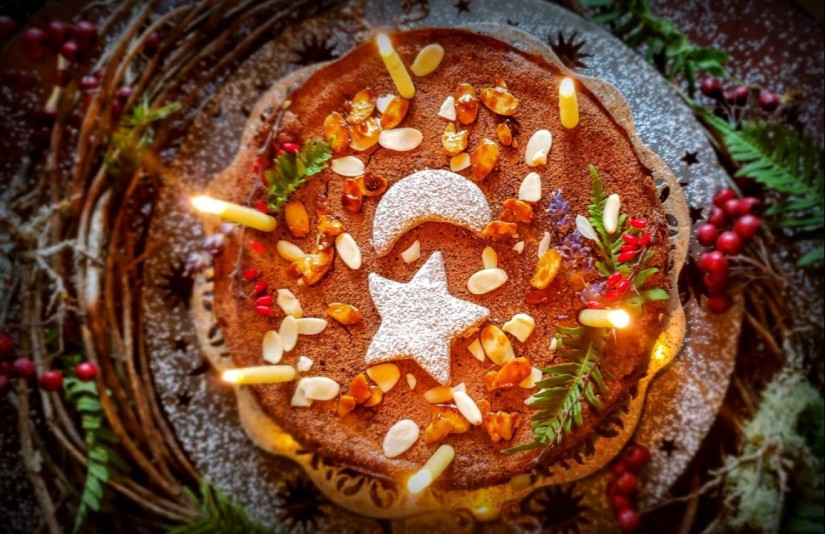 You may want to also consider this recipe for a Cake for the Priestess of the Dead (aka the Haliorunna), also from Gather Victoria, one of my favourite websites!

A Release Ritual with Hekate 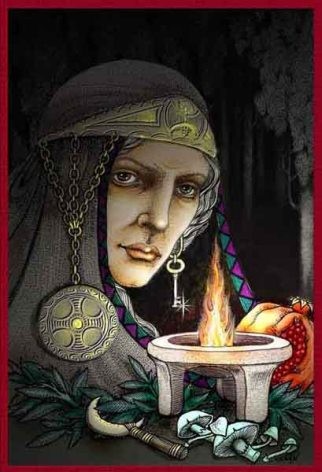 This can be done as a solitary practice, or in Circle with friends or fellow practitioners, during the Waning Moon (and is especially potent at the Balsamic or Dark Moon).

Prepare your sacred space and your Self by cleansing/smudging with sage (ethically sourced of course!) or other sacred herb or incense.  If you have an altar, consider adding some wood/tree elements associated with Hekate such as Yew, Hazel, Cypress, Willow, Black Poplar and Bay Laurel.

Sweep your home or space and collect a small amount of the debris, adding to your Cauldron or smudge.

Have on hand some paper and pen, a small candle and a fire-proof vessel (small cauldron or bowl).

Begin by lighting the candle and calling in your guides and allies, and Hekate.

Ask Hekate for her support It could be as simple as this:

Use the candle to ignite the paper and drop it into the fireproof vessel, saying:

Add the pinch of debris you have collected by sweeping, to represent what you are releasing: the “garbage” / no longer useful elements in your life.

Visualize what you are releasing being transformed into ashes and air. You are giving it back to Spirit. You are reborn in that fire. When the candle is fully burned down, thank your guides, allies and Hekate for their support.

Gather the ashes and return them to Earth. Make notes in your journal for reviewing at the New Moon and the next Dark Moon.

Another way to work with Hekate is to create a Hekate Bundle for use in ritual and soul work. I love the Hekate Bundles pictured in the image above, created by herbalist and witch Sarah Anne Lawless. She had originally published some suggestions on how to create your own bundle, but sadly it seems that her website seems to be now unpublished . . .  but hopefully her new website will be up again soon!

That being said, Lawless’s articles were guidelines or suggestions only. You are the magic. You are the Creator / Creatrix.

If you feel a connection to Hekate and to celebrating her, use these images as a starting point and add your own elements . . .  but keys are, well, key! Especially a “skeleton” key at this time of Samhain and to represent Hekate’s role as a Psychopomp. Consider using plants and herbs associated with Hekate (Lawless used mandrake, monkshood and yew in her bundles), such as dandelion, garlic, mugwort, lavender, mullein, myrrh, cardamom and hellebore.

This is the second of three articles posted today on Hekate. The other two are:

2 thoughts on “Celebrate Hekate with feasting and ritual”

Open now with Early Bird pricing
Join us to explore the Summer Solstice season and create your own celebrations to honour the Peak of Summer Fire and Magick, which is with us until Lúnasa on August 1st.
We will use the framework of the Celtic cosmology of Land, Sea and Sky — which exist in both the physical and spiritual realms — to explore the magick and medicine of Summer Solstice, aka Samhradh in Irish: practices, history, herbs and plants, gods and goddesses, rituals, divination and more! 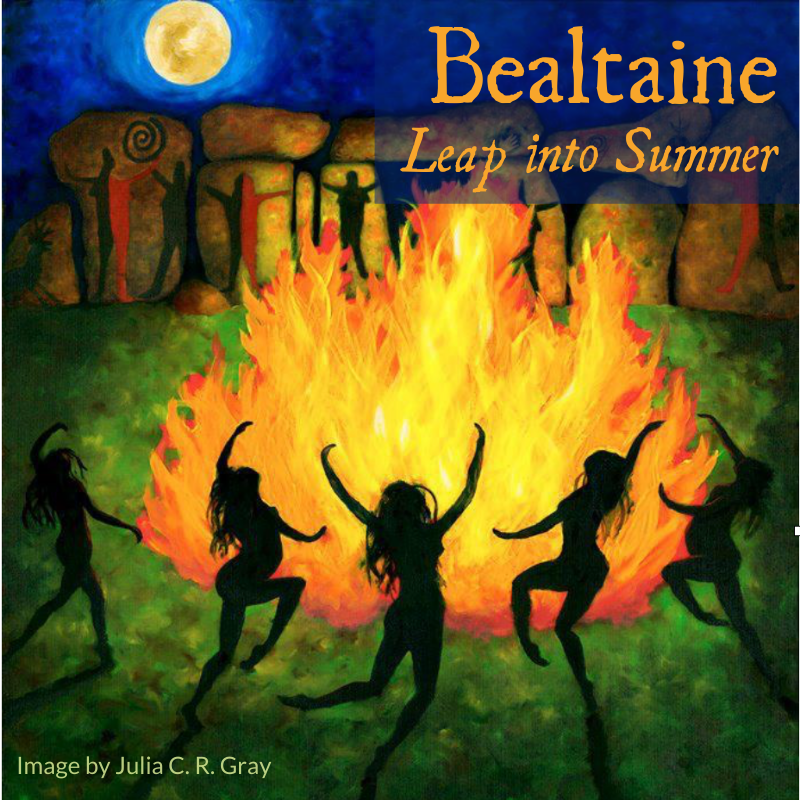 Open now
Celebrate Bealtaine and the season of Early Summer as we together explore the third of the Spring Celebrations in the Wheel of the Year — also considered as the first Summer celebration!  — considered by many as the start of the Light Half of the Irish Celtic Year.  We will consider these elements through the framework of the Celtic (and Druidic) cosmology of Land, Sea and Sky.! 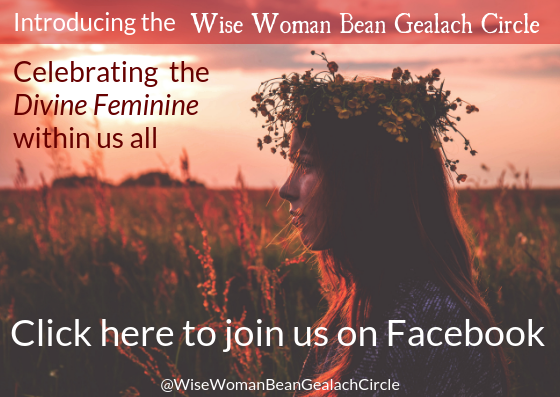 For more info or to join our private Facebook Group, the Wise Woman Bean Gealach Circle, click here or on the image above. This group is for womxn only.

Connect to your purpose, your medicine, and eliminate self-limiting beliefs. Click on the picture above for more information, or to book a session. For more info, visit our website:  www.innerjourneyevents.com